Victory for the German champion secures a lucrative treble after it also won the league and domestic cup earlier this year.
Despite all the attacking talent on display, one goal was enough to separate the two sides with former PSG man Kingsley Coman heading in the winning goal in the 59th minute.
Coman, a French international, guided his header into the bottom corner to add yet another trophy to his cabinet.
The 24-year-old has won the league title in every season he’s spent as a professional player, starting with PSG’s Ligue 1 victory in 2013.
Meanwhile, it’s yet more European disappointment for PSG which was playing in its first final.
The French champion, which was also bidding for a treble, has become obsessed with winning the Champions League since Qatar Sports Investments bought the Parisian club in 2011.
More than one billion dollars has been spent on the playing squad but stars such as Neymar and Kylian Mbappe were unable to get their side past a dominant Bayern which is still unbeaten in 2020. 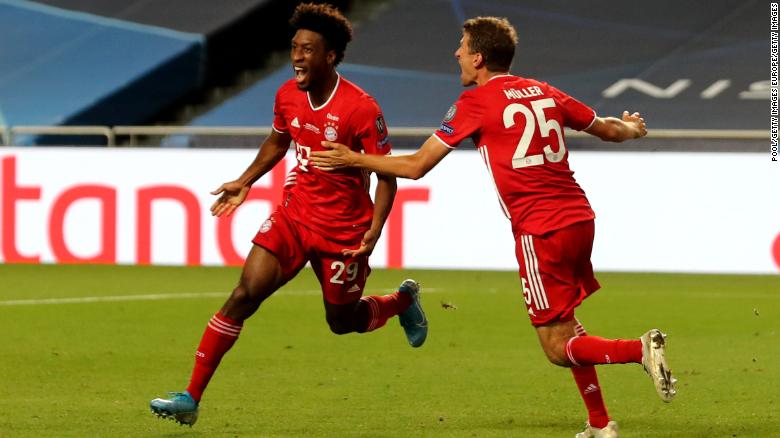 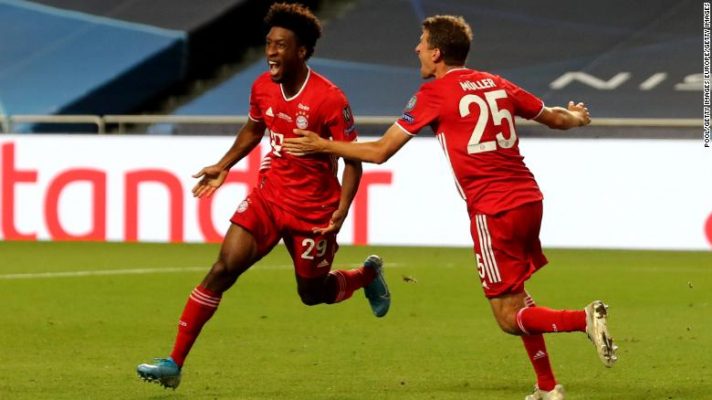 Played behind closed doors at the Estádio da Luz, this wasn’t the classic final many had hoped for after both sides scored so freely throughout the tournament.
Brazilian Neymar was denied the opener by a superb save from Manuel Neuer before Bayern’s Robert Lewandowski hit the post and had a header saved during an otherwise cagey first half.
Bayern’s high defensive line, in many ways its greatest strength, also gave encouragement to the lightning fast PSG attackers.
Mbappe and Neymar spent the night on the shoulders of Bayern’s defenders, waiting for the trigger to run in behind, but failed to convert when given the chance.
The second half hardly improved in terms of quality with Coman providing the game’s only piece of decisive attacking play.
“Winning the trophy today is the best thing that could happen to us. We worked incredibly hard and in the end it came through to be the best team in Europe,” Bayern winger Serge Gnabry told BT Sport after the game.
“It’s the final, Paris came out wanting to win and so did we. Nobody is going to give up easily but we came through.
“As long as it was 0-0, it was always going to be open for us. Of course, they were going to have chances. It was lucky they didn’t score and lucky we did score.”

Bayern has enjoyed domestic dominance in Germany — it has now won eight consecutive Bundesliga titles — but success in Europe has been hard to come by since its last Champions League triumph in 2013.
However, under Hans-Dieter Flick, Bayern has been on an incredible unbeaten run and was favorite to triumph over PSG’s glittering stars.
With Sunday’s victory, it become the first team to win all 11 Champions League games from the group stage, scoring 43 goals in those matches.
Striker Robert Lewandowski had one of the greatest individual seasons in the competition’s history but failed to get the two goals needed to match Cristiano Ronaldo’s record haul of 17 in a single campaign.
“It feels really good. It’s everything you dream of as a kid to come to Europe and win the Champions League with a great club like Bayern,” said 19-year-old Canadian left back Alphonso Davies, speaking to BT Sport after the game. “That just goes to show the team I have around me.”
“It shows that you can do anything you set your mind to. I am happy to be here with the Champions League medal around my neck and the trophy on the side.
“We know legends won this title before so as a young kid coming in you want to keep that going. Every young player at this club is hungry to win titles because they see their idols doing it.” 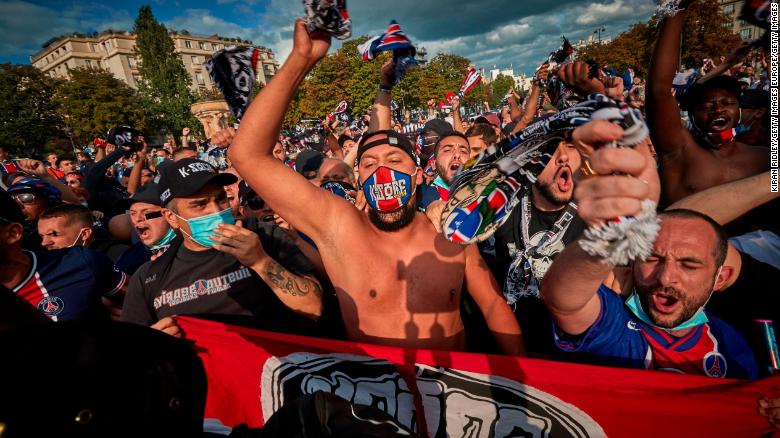 It’s certainly been the strangest Champions League in the competition’s history. It started over a year ago in June 2019 but the pandemic caused a lengthy postponement and a change to the tournament’s format.
The final knockout stages have been held behind closed doors in Lisbon under restricted conditions, with one knockout tie replacing the two-legged affair.

Latest Posts
Categories
Tag Cloud
'Mulan' may have to conquer the world5 Tips For Staying Fashionable On A Budget7 Expert Tips To Look Great While Relaxing8 Fashion Tips to Ensure You Always Look Stylish8 Tips To Get You Started11 Tips to Look Expensive14 Easy Ways to Instantly Look More Fashionable16 Cute Outfit Ideas and Pajamas to Wear to Bed35 Tips on How to Look Rich and Classy101 Hot Mens Fashion Style Outfits Ideas to Impress Your GirlA Beginner’s Guide: 16 Essential Style Tips For Guys Who Want to Dress BetterBayern MunichBayern Munich beats Paris Saint-Germain to win the Champions LeagueBeirutBeirut will never be the same againBlack Panther diedCardi B’s Famous Catsuit Is Now For SaleCasual Style Guide For MenChampions LeaguefashionFIVE WAYS TO BECOME A MORE SENSUALGet to Know South Africa’s Coolest Denim LineHow to Be a Classy GentlemanHow to be more stylishHow to be sexy? 6 tips for women to look sexier and feel confident!How To Dress Well: The 15 Rules All Men Should LearnHow To Dress Well On a Budget For GuysHow To Effortlessly Look Stylish Every DayHow To Get Your Man To Dress BetterHow to Improve Your Personal Style (Without Going Shopping)NewsParis Saint-GermainQuarantine Is Making Me Dress Like a Teenage Camp CounselorSIX WAYS TO LIVE YOUR MOST STYLISH LIFEThe 23 Sexiest Things a Guy Can Wearthe Best Dressed Stars Set the Tone for 2021This WeekTo be a successUkrainian church leader who called Covid-19 'God's punishment' for same-sex marriage tests positive for virusUS accuses Russia of conducting sophisticated disinformation and propaganda campaignWhat haircut should my boyfriend get?WHAT SHOES TO WEAR ON A NIGHT OUTWhat to Wear to a BarWHAT TO WEAR TO A CLUB (WOMEN’S STYLE GUIDE)Your Ultimate Guide Of What To Wear On A First Date